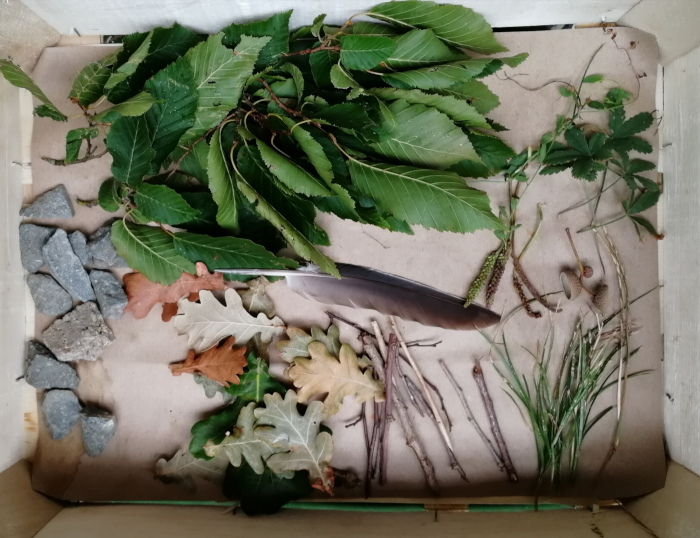 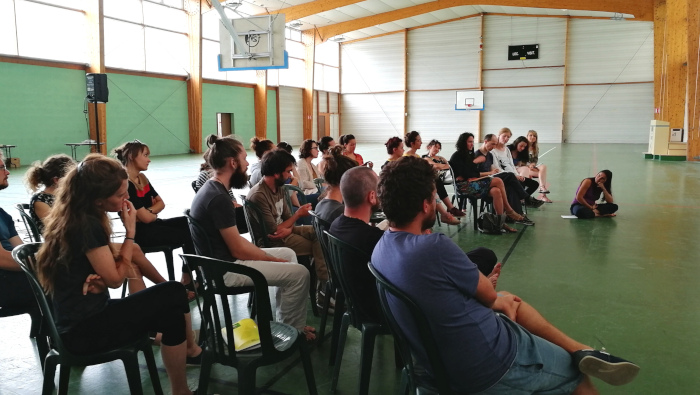 The frame is tenderness.
The subject is collapse (= l’effrondrement*, in French).
The goal is a cooperative poetic action in the form of a show.

The main lines of work are focused on the sounds of the language, the co-realization of the scenic effects with the audience and the proposal of new stories to imagine the collapse of our thermo-industrial world in a multifaceted approach.

Addressing the topic of the collapse with tenderness
Since the creation of Cambodge, Se souvenir des images, I have chosen tenderness as a framework to guide my artistic choices in the construction of shows that I propose to the audience. By this, I seek a form of fluidity in the permanent passage from one emotion to another during the representation, emotions that emerge without violence and whose nature is plural, mixed. This is a path that I continue to follow and that will inspire my research while addressing today the topic of collapse. How to soften the reception of a subject that can bring out extreme emotions and the deep anxiety reliated the end of “our” world? It is the challenge that is at the heart of this show, in which humor and tenderness will be part of my tools. This is also the reason why I want to propose to the spectators to take part to the representation in a resolutely active way.

Welcoming the creativity of the spectators in action
Faced with alarming announcements about our common future, we are easily overwhelmed by emotions (from stunning shock to fascination or helplessness feelings) that are violently crippling. That’s why I want to accompany the spectators in the mobilization of their creative capacities so that they can live the representation while being in action. In the continuity of the show C’est bon. E ok. Rendben. This is just a story, I will delegate to them the realization of scenic effects, mainly sound effects. And for this cooperation to be clearly considered necessary, the show will take the form of a cooperative solo for non-theatrical venues, without any equipment (ideally gymnasiums).

Audio excerpt from this work in progress:
At the festival “Sans Transition?”, after four days of “laboratory work” with some thirty invited artists also working on the theme of collapse, I presented my approach with an improvised speech of 30 minutes in frint of the audience. Here are two audio extracts of this presentation.

1st excerpt: before handing over to the spectators, it is needed to build little by little the atmosphere most favorable to their participation. This presentation of my approach about the animal sonority of human language and the proposal of a new meaning to the term “effondrement” will be part of the show. So in this excerpt, I am explaining my attempt to hear human language in animal sounds, as for the word “l’effondrement” (= the collapse) that I pronounce using wolf howling, bird flight, monkey voices… Then, I let people imagine that “effondrement” is not only a noun, but that it can be heard as an adverb (“-ment” being also the ending of French adverbs), meaning something like “collapsally”. Then, as an adverb is the combination of an adjective with a special ending like “-ment”, I invent the adjective “effondre”, meaning something like “passing from vertical to horizontal, peacefully without form, ready to take form again”… And then, to help people to get familiar with this word, I give some examples of possible expressions using it, and I sing a song with the word “effondre” being part of the lyrics.

2nd excerpt: it is drawn from an array of experiments with the audience. What audio scenic effects can I consider for my next show? Through my resarch, I make a permanent round-trip between the considered and tested scenic effects, available for dramaturgy, and the desired scenic effects due to the writing progress in progress (are they possible?). What if we all click our tongues? What if we make the sound of a wave? Can we ake the sound of the tsunami, with abig wave splashing on the shore?

Solo as a starting point for collective and creative action
The form of the solo can be an ideal springboard to encourage public involvement in the collective performance of a show. Its concrete participation involves the investment of places left vacant by the absence of stage partners or technical equipment. This insufficiency of the scene encourages and legitimizes the co-realization – even co-creation – of light, sound, music, acting, etc., thanks to what people usually have on them (a telephone, keys, etc.). That’s why I’m talking about “cooperative solo”. It is the benevolent, sometimes clownish, naive atmosphere that encourages the participation of spectators, while giving them the necessary leeway to express their creativity.

Where to host the show?
A gym is the ideal place because acoustics generate an echo that is welcome for the show. The gym is therefore a place that resonates acoustically but also symbolically with the approach that I consider implementing. Indeed as far as dramaturgy is concerned, the gymnasium is usually the place where people gather after a disaster. Also, the gymnasium is the place of a collective effort (sports): this will accompany my will to put the public in action while evoking the collapse of our thermo-industrial world. For this show, I will not work with smartphone lighting like the latest one (I will use natural light or just the usual lighting of the building): the scenic effects made with the public will be mainly sound effects.
In not in a gymnasium, where would you welcome the inhabitants of your city in the event of a disaster? A school yard, a village hall (if little equipped), a disused building, etc. can also offer adequate conditions for the show (to study together).

(*) : The concept of effondrement (collapse), whether popular or controversial, is one of the terms frequently used in the French media to evoke the end (often considered by the authors as progressive and already begun) of our thermo-industrial civilization model. Among the personalities who helped raise media and public awareness about collapse, we can name scientists Dennis Meadows, Joseph Tainter and Jared Diamond or the authors of the book How everything could collapse published in French in 2015, Pablo Servigne and Raphaël Stevens.

Show produced by La TraverScène company, initiated in residence at the artistic laboratory about the topic “effondrement” organized before the festival festival “Sans Transition ?” 2019 in Saint-Lézin (F), co-organized by the collective “Sans Transition ?” and the association Un Pas de Côté. Work continued with a short residence in Zaoum, Clermont-Ferrand (F). Thanks to Fabrica de Pensule, Julien Daillère will work by video conference with the professors and students of different schools in Cluj Napoca (RO). He will then work with students in live workshops next to Paris, during a creative residence in Anis Gras, le lieu de l’autre in Arcueil (F) in March 2020 or later.